Anthony Crolla admitted that the end of his career is coming very soon after he failed to ‘shock the world’ and lost in four rounds to the impressive Vasyl Lomachenko in Los Angeles on Friday night.

It’s not very often that any sporting contest between two people has odds of 1/100 in favour of one of them but that was the reality facing Anthony Crolla when he took on bookies favourite Vasyl Lomachenko on Friday.

The Mancunian fighter had earned himself a shot at Lomachenko but the Ukrainian is probably the best pound-for-pound boxer in the world right now, and so it showed in the fight.

Crolla is known for his heart and determination but it wasn’t enough as the fight nearly got stopped in the third round following a knockdown and did in the fourth after a shot to the Brit’s temple, that broke Loma’s hand in the process.

After the fight the 32 year old former lightweight champion admitted that his career might be over:

Speaking to Sky Sports, Crolla said, “My pride is a bit hurt, my team put so much effort in with me. I’m a bit gutted. I lost to a special fighter, I just wanted to give a better account of myself, but he hit me with a great shot. It’s the first time I’ve been hit like that. As I went down I knew as frustrating as it was, I wasn’t going to beat the 10 count, my senses went everywhere.

“I’m just gutted, I got in the best shape of my life and for it to end like that and as early as it did, very gutting.

“I knew how his balance was and his feet, he’s very hard to hit, I thought he was very good at angles, he’s a fantastic fighter.

“I don’t know, I’m going to have some time to think about it. I wouldn’t really want to go out like that but I’ve banged on about staying in boxing too long.

“I love this sport, it’s a big part of my life but I’ve not got much left now, so we’ll see whether we’ve got one more later in the year.

“I’ll speak with the team, maybe back in Manchester, I don’t know. I had a fantastic camp and I felt brilliant, so it’s very disappointing.

“I don’t want to go out like that but the end is near.” 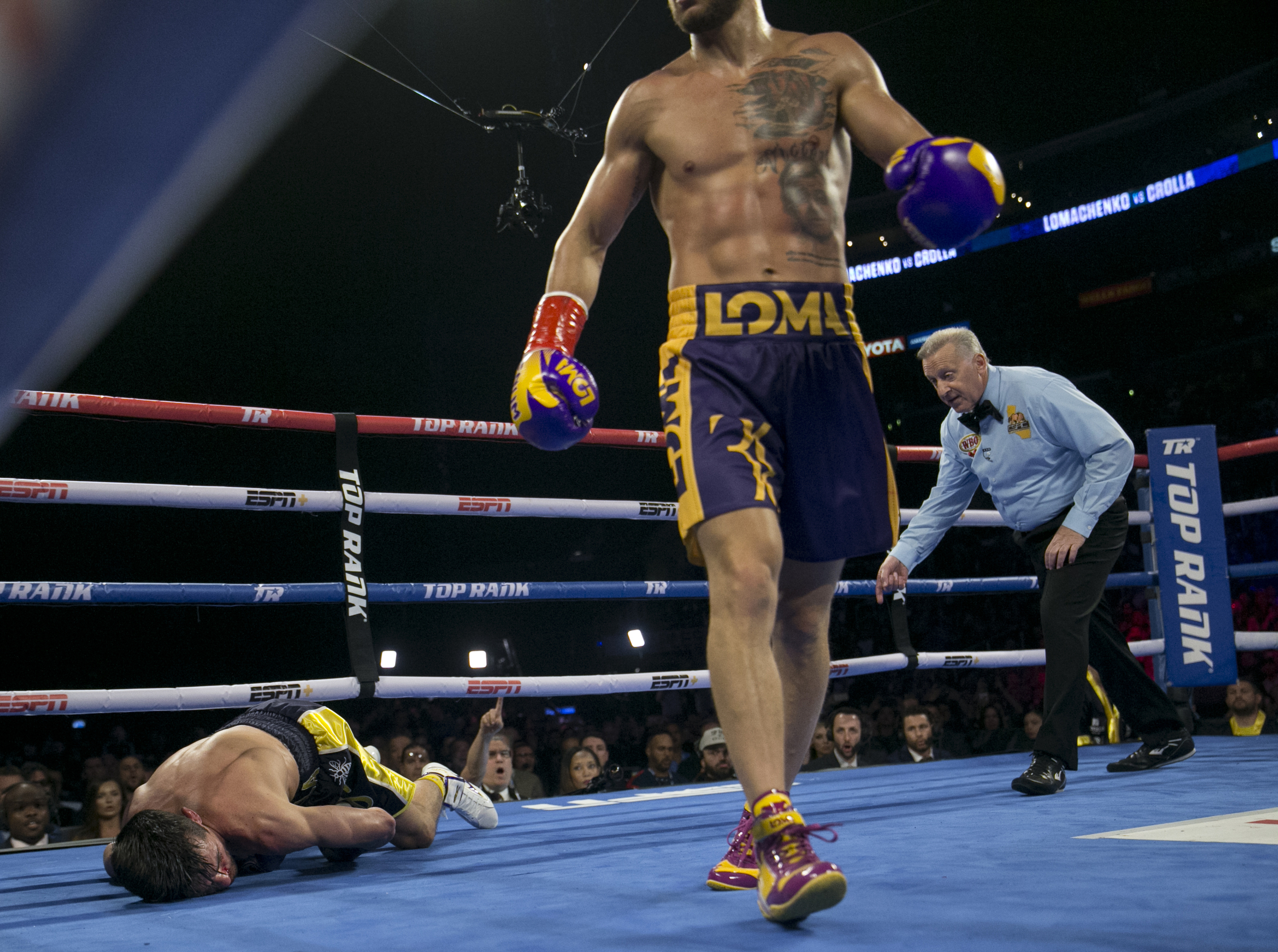 Crolla was laid out by Lomachenko in the fourth round. Image: PA Images

The fight was just the second for Crolla in the US, having beaten Juan Montiel on the undercard of Floyd Mayweather’s win against Victor Ortiz in September 2011.

Having won the lightweight title against Darleys Perez in 2015, Crolla next surprised Ismael Barroso before a tight points loss to Jorge Linares.

The rematch with Linares was far more one sided, before the Venezuelan was outclassed by Lomachenko. Crolla returned with wins against Ricky Burns and Edson Ramirez before his win over Daud Yordan earned him the fight with Lomachenko.

Will Crolla retire or have one more fight in Manchester?