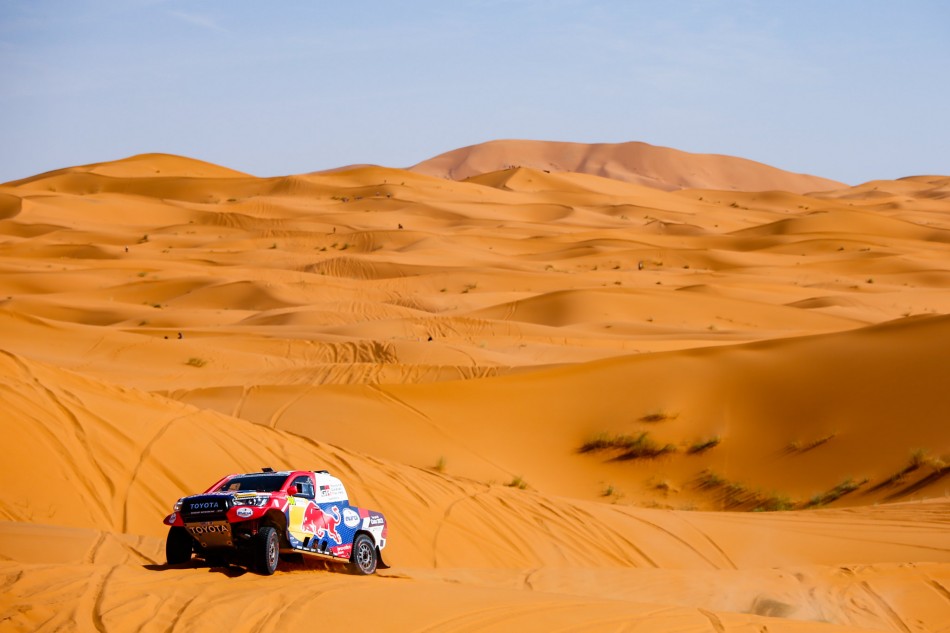 Nasser Al-Attiyah and co-driver Mathieu Baumel powered through the second leg of the Rallye du Maroc, blitzing the opposition by an impressive 11 minutes and nine seconds. The Toyota Hilux duo now head team-mates Giniel de Villiers/Alex Haro by more than 17 minutes with Stéphane and Andrea Peterhansel rounding out the top three just 37 seconds further adrift in the lead MINI.

Sunday’s leg of the final round of the FIA World Cup for Cross Country Rallies was the second longest of the event and took the crews to the sand and dunes on a 386 kilometre loop around the bivouac in Erfoud. Al-Attiyah was in commanding form throughout the entire section, leading the crews back to sanctuary after five hours of competitive driving in intense heat. “It was a long day!” said the Qatari. “It was not an easy section and we had one puncture but no mistakes with the navigation. It was a good stage for us, sometimes at 100% but other times it was difficult to push.”

De Villiers started the day in third and moved up a position with fourth fastest through the section, despite a broken manifold after 240 kilometres. “It was very hard, we lost power and the car was using more fuel,” said the South African. “We reached the finish with just 10 litres left so it was a bit touch and go. It was about survival and we’ll try again tomorrow.”

The husband and wife crew of Stéphane and Andrea Peterhansel climbed into third overall, also third fastest over the varied section. “It was a really nice and interesting special, but complicated with the navigation; not easy in the dunes,” said the Frenchman. “We had no problems, punctures and never got stuck, just a little time lost with two small navigation issues.”

After setting an impressive pace yesterday, when he and co-driver Fabian Lurquin were second fastest, Mathieu Serradori dropped time today and he finished the stage in seventh. The French/Belgian pairing drop to fourth overall in their Century Racing CR6.

Bernhard ten Brinke and Tom Colsoul maintain fifth position, despite dropping just over 18 minutes in the section. “That was tough, very difficult,” said ten Brinke. “We were quite close to Giniel [de Villiers] and in his dust, and then we picked up a puncture. It was good in the dunes but we then had another puncture and 60 kilometres before the finish the driveshaft broke. It was tough, but the Toyota did good and got us here.”

Carlos Sainz and Lucas Cruz move from eighth to sixth, the Spaniards now over 30 minutes off the lead. “We had a navigation problem in the dunes and got stuck a couple of times,” said Sainz. “Not so easy, plus one puncture.”

Erik van Loon, co-driven by Sebastien Delaunay, holds seventh overnight after a good day in his Toyota Hilux. “That was a real stage, it had everything,” said the Dutchman. “We changed the suspension overnight and everything has worked well today.”

After their brake and tyre issues yesterday, Jakub Przygoński and Timo Gottschalk enjoyed a far better day and were only beaten by Al-Attiyah in the section. “It was long and navigation was tricky over a big variety of terrain,” commented the Pole, eighth overnight. “I’m happy we had a good rhythm but we lost a couple of minutes not reaching the top of the dunes. It was a really long day, tough for the car but we had no technical problems or punctures.”

Aron Domzala and Maciej Marton continue to head the T3 category in their Can-Am Maverick X3, the Poles ninth overnight in the overall classification.

Fernando Alonso, co-driven by Marc Coma, had a far better day having been blighted by punctures in the opening leg. They rocketed up the leaderboard with 10th fastest time from 21st to 10th overall. “It was a good trouble-free day and I enjoyed the full kilometres with no issues,” said the three time FIA F1 and WEC World Champion. “The start order was again difficult for us with the dust, but I’m happy with how it went; it was enjoyable.”

The third leg on Monday is another long section covering 363 kilometres, again looping in and out of Erfoud.