Almost every shot has a different trajectory. Some are high, as he tries to land the ball softly on a designated area of the green some 30 yards away. Others are low, as he tries to skip and spin the ball to a back pin. Nearby, an older woman struggles to make contact with the ball, and sometimes when she does, it veers wildly to the right, not far from where Romo is standing.

He doesn’t even notice.

For nearly 30 minutes, Romo is searching for the right feel in his hands with the wedge before heading to the back part of the driving range. Although he can pick the best of lies on the grass, he chooses hard-packed sand as he goes through another series of wedges and irons. 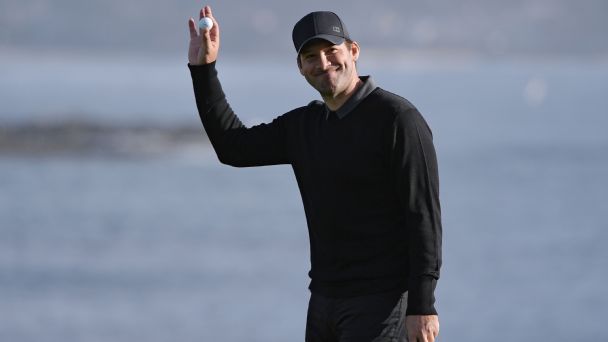 “When you hit off sand, you can’t fake it,” Romo said, three fingers covered in bandages to protect old blisters and prevent new ones.

This is Romo’s life now. It’s a good one, just like it was when he was the starting quarterback for the Dallas Cowboys. It’s just different.

Every morning, Romo is at a golf range at one of a handful of courses in the Dallas area, working on his game or playing with friends. He spends hours trying to unlock the secrets to the game he loves.

On this day at Gleneagles, he is playing with four friends. But his eyes are on what awaits him this week at the AT&T Byron Nelson at Trinity Forest Golf Club in Dallas, where he’s playing in the PGA Tour event on a sponsor’s exemption.

“It’s going to be fun,” Romo said. “It’s Dallas. I’m a member there. I love the course. It’s great. The kids are coming out to watch me. That’ll be fun for me. See if we can live up to the improvement I hope I’ve made. It’s going to be enjoyable. Excited to see the fans, everyone that comes out. It’ll feel like a football game. It’ll feel like that, for sure.”

Football made Romo famous. He became the Cowboys’ all-time leader in passing yards (34,183) and touchdown passes (248) in a decadelong run as the starting quarterback. A series of back injuries led him to an early retirement following the 2016 season, but his fame has grown with his success as the lead NFL analyst for CBS over the past two years.

Golf has always been a passion. He got his first set of clubs for Christmas when he was 8 years old. His mother, Joan, worked at Browns Lake Golf Course, just down the street from the family home in Burlington, Wisconsin. Romo would spend hours hitting balls at the range before school or long after sunset.

When he was the Cowboys’ quarterback, some fans stewed over how much he played golf. He attempted to qualify for the Byron Nelson and the U.S. Open. He played in prestigious amateur events across the country.

Over the years, he has golfed with Tiger Woods, Michael Jordan and other famous athletes and celebrities. He has regular games with PGA Tour member Jordan Spieth, who is from Dallas, and other local pros. He has even played with former presidents George W. Bush and Barack Obama.

The round with Obama, along with former Cowboys running back Emmitt Smith and former Dallas mayor Ron Kirk, who served as Obama’s U.S. Trade Representative, was at Trinity Forest on the same day Woods won the 2019 Masters.

“He’s got game,” Romo said of Obama. “President Bush, George W., he plays all the time here in Dallas. He’s got a ton of game. I think they like playing golf when they’re done and out of office. Kind of like me, I guess. I’m out of office.”

Romo knew his football schedule almost down to the minute when he was with the Cowboys. As much as he played, golf was more of a release. Without the time constraints posed by football practices and offseason conditioning, his focus on golf has become greater in retirement. Romo hired a pair of coaches, Chris O’Connell, who works with Matt Kuchar, and Andy Traynor, to help with his game.

“Last year in February was the first time I was like, ‘Let me see how good I can be,'” Romo said.

The state of his game from when he was playing football to now — he believes — is markedly different.

“I could score a little bit before, but you couldn’t hit shots,” he said. “You couldn’t do things that you need to do. When the greens get firmer, faster, I mean that’s what separates guys. Conditions, courses get longer, the rough gets higher. Each level you go up, it gets tougher. So you try to get your game to a point where you can handle some of that stuff.

“It’s a work in progress. I’ve been doing this about a year, a year and two months, so I feel like it’s like football in some ways. The progression it’s taking right now, it’s probably about a three-year run realistically as far as to keep improving to where you can compete at a level, that consistency aspect, not just a shot or two. But it’s why we play the game. It’s why we love sports. I love competing, but I also love improving and getting better and seeing how good you can be.”

It’s like being an unknown quarterback from Eastern Illinois in 2003 all over again.

Now, though, he’s 39 years old and still battling back issues that require strength training and rehab, but the issues are not enough to keep him from practicing. During the winter months, Romo was the lone player on the Trinity Forest driving range when temperatures dipped below 30. He regularly sends video to his coaches of him hitting into the simulator at his house.

“He doesn’t like to do the same thing every day,” O’Connell said. “I mean he kind of likes a new task, a new challenge. In terms of his mechanics with his golf swing, it’s a similar message day in and day out. We’re not jumping around trying different stuff. We’re working on the stuff that’s going to most positively impact the ball flight but with short game and course strategy and how to hit knockdown shots and how to work the ball. I mean he’s really grown a lot.

“He was pretty raw when we started in terms of tournament golf. … But he’s really developing and turning into a more complete player.”

Improvement is name of the game

The Byron Nelson will be Romo’s third PGA Tour event, but he has maintained his amateur status. He has received a sponsor’s exemption into the Corales Puntacana Golf & Resort Championship in the Dominican Republic the past two years, missing the cut both times at 15 over.

He placed blame on his recent missed cut on the greens, where he averaged 2.3 putts per hole.

“That’s almost laughable,” Romo said. “It made me know I need to work at this. Your focus needs to turn toward that. You see it as a weakness and I thought it was a strength. Obviously it didn’t turn out that way.”

He changed putters, going to an elongated club with a hockey-stick grip. He practices more and goes through drills that help with the lines and pace of each putt.

“So much of putting is putting yourself in position to feel comfortable with the line so you can just stroke it,” he said.

At the first hole on the Queen’s Course at Gleneagles, he makes a 4-footer for birdie. On the par-3 second, he misses a 6-footer for par after his tee shot misses the green to the right.

“You’ve got to chip it closer so you don’t give yourself a putt that’s 6, 8 feet, you know? But you’ve still got to make those,” Romo said. “Soft bogey.”

For the rest of the front nine, Romo misses three fairways but does not make another bogey, saving par with an 18-foot putt after blasting out of the sand on No. 7. On the par-5 eighth hole, he has just 146 yards for his second shot.

With a downhill lie and into a stiff breeze, he hits a low 9-iron.

“Be right,” he says with the ball in flight. The ball lands short on the bank in front of the green and nearly rolls back into the water.

He chips to 15 feet and drains the putt for his second birdie of the day, which will be the type of recovery he will need at Trinity Forest to fare better than he did at Puntacana.

He said he has no goal for the Byron Nelson event, such as making the cut to advance to the weekend of play.

“There’s different success as far as the way you think of it,” Romo said. “For me, I want to be the same guy I have been and go out there and perform and just hit the ball the same way, do the same things I’ve been doing and then scorewise, let’s see how that is. It’s all about improvement. 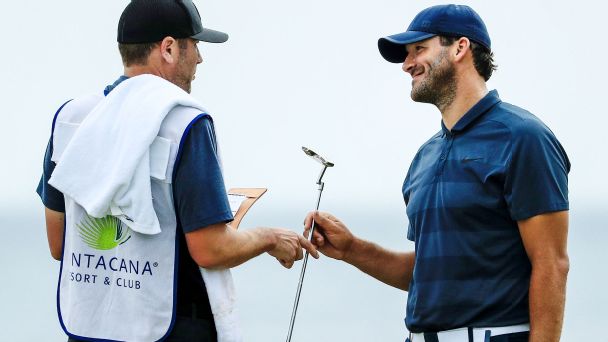 “As long as you keep improving, the results just come as long as you’re doing things correctly. And then just wearing it out every day. I mean, it’s got to be something you care about deeply if you’re going to really improve.”

He was the same way in football. He spent hours working on his release, throwing a football into a living room couch. In golf, he is always asking O’Connell and Traynor questions.

“A lot of people in golf get to a certain level and they kind of stay at that same level, so if he keeps getting better every day, he’s going to start catching up and passing some of those guys,” O’Connell said. “He’s obviously a great athlete. He has lots of power. He has some back issues, which he’s on top of, but in terms of power and work ethic, I mean, he’s got a lot of upside.”

The Byron Nelson field is not as strong as it has been in the past, especially with the PGA Championship next week at Bethpage Black in New York, yet some golf purists don’t like the fact that Romo gets exemptions, believing they should go to professionals trying to make this their job.

“Well, this is what I want to do,” Romo said. “This is my livelihood. I think it’s the same as anything. You have to show you have the ability. You don’t just get them randomly. You’ve got to be able to perform at some time in front of somebody who thinks you deserve it. I’ve been practicing … and I practice really hard at it, just like a touring pro. Same type of schedule. Mornings you get up, it’s a routine, just like you’re playing football. I understand you only get so many [exemptions], so you’ve got to perform. Hopefully that time is coming.”

Regardless of how he fares at the Byron Nelson, Romo is set to be at TPC Craig Ranch in McKinney, Texas, for U.S. Open qualifying on Monday. It’s his life now.

Race of my life: Michael…

The day Rosberg and Hamilton’s…

When Irvine stepped out of…

When Irvine showed he was…

The F1 reject that went…